Debriefing Session II was created by Alhena Katsof and Dana Yahalomi during residencies at Artport Tel Aviv and was presented as part of the exhibition National Collection at the Tel Aviv Museum of Art in 2015.
The phenomenal performative relationship between the state and its cultural institutions was exemplified when the declaration of the State of Israel was staged at the Tel Aviv Museum of Art in 1948. Public Movement investigates this relationship between culture and national identity. Specifically, the performance Debriefing Session II raises questions about museums, art collections and nation-states, and the ways in which the rationale of these institutions shape and determine each other.
Debriefing Session II is a one-on-one, private meeting in which the Public Movement Agent draws a complex net of accounts, charting the group's research about modern art made in Palestine before 1948, to activate current politics. Public Movement presents the debriefing format as a methodology for the transmission of information, turning research into action. At the heart of the debriefing is the possibility that to activate art in the political field, an agent may be a double agent.

The episode felt like it could have taken place in an espionage film or a government building just as easily as a museum. Indeed, the information conveyed during the session reinforced the tenuous connection between “truth” and “reality” as well as the firm one between the nation-state and museum.

Details of the conversation that followed have dissipated from my memory, but that both is and is beside the point. “Debriefing Session II” mines the divide between the ephemerality of information and the permanence of objects.
Hyperallergic / Risa Puleo 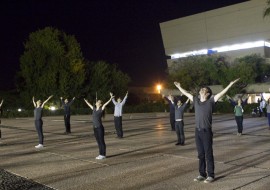 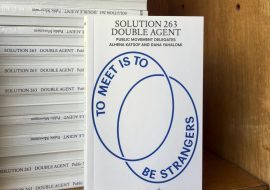